Last Friday I had a jaunt out with my husband to see Hopetoun House. This is located outside of South Queensferry, which is west of Edinburgh. We had visited part of the estate earlier in the summer to  see Midhope Castle (Lallybroch).

The house was used as were the Duke of Sandringham was staying. They used the back of the house which shows off the original building very well. The red drawing room was used as well as the grounds for filming.

Hopetoun House is a country house near Queensferry, West Lothian, owned by the Hopetoun House Preservvation Trust. The south wing of the house is occupied by the Marquis of Linlithgow and his family as their family home.

The house was built 1699-1701 and designed by Sir William Bruce. The house was then hugely extended from 1721 by William Adam until his death in 1748. The interior was completed by his sons John Adam and Robert Adam. Ref – Hopetoun House 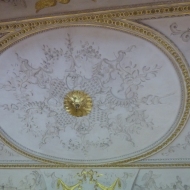 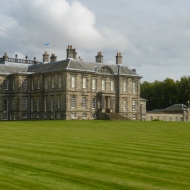 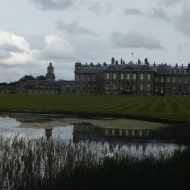